30 Day Challenge #3 : A Book that completely surprised me.

Today’s prompt in the 30 Day Book Challenge asked me to talk about a book that completely surprised me.  Either by being good, or bad.

I chose The Dead Zone by Stephen King. 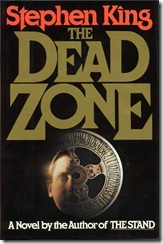 I never used to read Stephen King novels.  I assumed that they were all trashy and stupid.  I guess I really was judging a book (or author) by it’s movie.

I saw The Dead Zone on television,  (The awesome movie, not the terrible TV series)  and I loved it.

Then a few years later my mother got the book out at the library.  (I don’t think she knew who Stephen King was.)  So when I ran out of books of my own to read, I gave it a try.  And I loved it too.

Stephen King is a genius.  A lot of his later books became too heavily influenced by his movie success I think, and were not as good.  His books started to become more like the movies they made out of them, instead of the other way around.  However his classic stuff is still awesome.

The Dead Zone completely surprised me, and caused me to start reading everything of his I could lay my hands on.

It is not necessarily my favourite of his books, not by a long shot.  However it showed me that you can’t judge an author by what Hollywood does with his work.

For more on the 30 Day Book Challenge, go here.

How is a person supposed to have a favourite book?  That’s a little like asking me what is my favourite glass of water.  They have all nourished me in different ways, and at different times.

But one book?  One novel above them all?

Strangely enough there is no correlation between favourite authors and favourite books.  I am a Stephen King fan, but his work does not appear on the list.  I am a huge Jane Austen fan, but Bronte trumps her for favourite novel.  I love Isaac Asimov, but an anthropologist (Le Guin) beats the scientist for best Sci-Fi novel.

What is my favourite novel?

If only it were that easy.

For more on the 30 Day Book Challenge, go here.

I have read this book about three times, and I always like to keep it on my desk for reference purposes.

It is one of the best books on writing I have ever read.  It combines real life stories about King’s life with advice about writing.  It covers everything from attitude, to nuts-and-bolts techniques.

I learned a great deal about how to write, but also about what makes a writer.  About the process of making it in the industry, and about the pitfalls, both before and after you are actually writing.